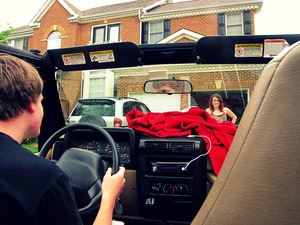 Car accidents are the number one cause of death for teenagers in southeastern Missouri and throughout the U.S., according to the National Highway Traffic Safety Administration (NHTSA). What's more, 11% of teens who died in 2010 traffic accidents were distracted. And despite multiple campaigns aimed at raising awareness about the dangers of distracted driving, a striking number of teens are still using electronic devices when they're behind the wheel. In June 2012, the Consumer Reports National Research Center surveyed teen drivers nationwide, and here's what they found:


• Approximately half of the drivers surveyed said they had talked on a handheld phone while driving within the last 30 days.

• Nearly 30% of respondents said they had texted while driving within the same time frame.

Also, strikingly, nearly everyone surveyed "considered texting, using smart-phone apps, or accessing the Internet to be dangerous while driving; about 80 percent thought it was very dangerous. Also, 63 percent of those surveyed saw talking on a handheld phone while driving as dangerous."

So, why are so many teens still engaging in these behaviors? Another recent survey - this one from Liberty Mutual and Students Against Destructive Decisions (SADD) - suggests that parents may be partially to blame:


• 59% of teens surveyed said they had seen their parents texting while driving.

• 91% reported seeing their parents talking on a handheld phone while driving.

"Kids begin to learn to drive long before we think they do," Dave Melton, director of Transportation Consulting Services at the Liberty Mutual Research Institute for Safety, told the New York Times. "They go to the driving school of mom and dad for a long, long time. How can we expect them to do anything other than what we've taught them?"

• Model good behavior. To demonstrate the dangers of distracted driving to your teen, remember that actions speak louder than words: avoid using a handheld device when you're driving.

• Set some ground rules. Make sure your teen understands what you expect. It's always a good idea to discuss the risks and responsibilities that come with driving, and to establish some parameters about acceptable behavior. It's also a good idea to reinforce that discussion with a parent-teen driving contract that lays out the rules - and the consequences of breaking those rules.

• Stay involved with your teen's driving education. Practice driving with your teen on a regular basis, and keep talking about issues - like distraction - that can threaten their safety.

At Aaron Sachs & Associates, P.C., our personal injury lawyers represent car accident victims in Cape Girardeau, Missouri and throughout the surrounding areas, including Poplar Bluff, Van Buren, Kennett, Viburnum, New Madrid, Perryville, Sikeston, Ste. Genevieve and Potosi. If you've been injured in a Missouri crash, we may be able to assist you. To schedule an appointment for a free initial consultation, please call us toll-free at 1-888-777-AUTO, or visit our website.
Attorney meetings by appointment only
Categories