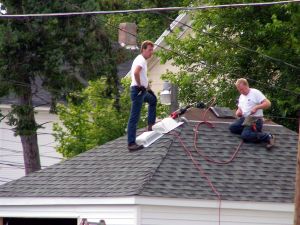 Last week, a construction worker was killed when he fell eight stories from the roof of a Thomas Jefferson University Hospital building. The Philadelphia Inquirer reports that the 39 year-old man, who has not been identified, worked for Palmer Masonry Restoration, based in Somerton, PA. He apparently slipped and fell, and he was pronounced dead at the scene of the accident.

The Occupational Health and Safety Administration (OSHA) is currently investigating the incident. Investigators are working to determine what the man was doing prior to his fall, and what kind of fall protection system he was using. Palmer Masonry Restoration has declined to comment on the incident, but the company has no prior record of safety violations with OSHA. Palmer's website says all employees must undergo 30 hours of OSHA construction safety training, along with training in fall protection, suspension scaffolding and aerial lift training, before going on the job.

Here are a few facts about workplace falls, courtesy of the Centers for Disease Control and Prevention:

• In 2009, 605 workers died and an estimated 212,760 more sustained serious injuries in workplace falls to a lower level or to the same level, according to Bureau of Labor statistics.

• In addition, workers in healthcare support, building maintenance/cleaning, transportation, material moving, and construction/extraction jobs are at the highest risk for workplace falls.

To help address the increased risk of workplace falls in construction workers, OSHA has announced a new 2012 fall prevention campaign to raise awareness about the dangers facing these employees, and to ensure employers have appropriate protections in place for their employees. "When working at heights, everyone needs to plan ahead to get the job done safely, provide the right equipment and train workers to use the equipment safely," said Dr. David Michaels, assistant secretary of labor for occupational safety and health, in an OSHA news release.