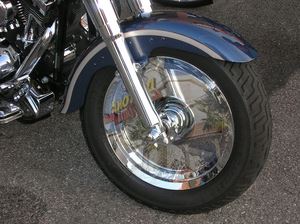 A Kansas City, Kansas man has died following a single-vehicle motorcycle crash on Interstate 70. According to the Kansas City Star, 30 year old Travis Tankersley was traveling west when he attempted to exit the highway at Washington Boulevard. Authorities say Tankersley struck the guard rail on the exit ramp: he was ejected from his motorcycle and thrown over the wall of the elevated ramp. He was reportedly not wearing a helmet at the time of the crash.

A recent report from the U.S. Government Accountability Office (GOA) found that direct costs associated with motorcycle crashes reached approximately $16 billion in 2010. In fact, researchers believe that the true cost is even higher, since it's often difficult to track the long-term expenses for the victims of serious injuries: medical treatment for such injuries can take several years, and costs associated with certain other factors (like employment changes and living status) can't be accurately measured.

Here are a few other noteworthy findings from the report:

• Motorcyclists are 30 times more likely to die in crashes than the drivers of other kinds of vehicles.

• On average, a single fatal motorcycle crash resulted in an estimated $1.2 million in costs. Costs associated with injury accidents ranged from $2,500 to $1.4 million, depending on the severity of the injury.

• Helmet laws have proven to be the only safety measure that effectively reduces motorcycle accidents. Data from the National Highway Traffic Safety Administration (NHTSA) indicates that helmets saved approximately 1,550 motorcyclists' lives in 2010.

19 states - including Missouri - have passed universal helmet laws. In addition, 28 states - including Kansas - have partial helmet laws in place that require certain riders to wear helmets. In Kansas, only riders age 17 and younger must wear helmets. Many motorcycle groups are against universal helmet laws, arguing that safety education is the best way to reduce motorcycle accidents. However, certain safety groups disagree. "Education is not a substitute for wearing a helmet," Jackie Gillan, president of Advocates for Highway and Auto Safety, recently told NPR. "It's like saying if you take a driver's ed class, you don't have to wear your seat belt. Now how silly is that?"