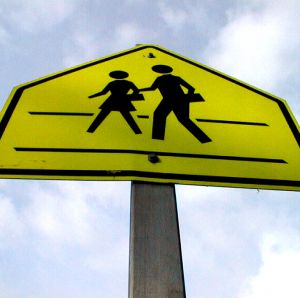 On Wednesday, eight California high school students were injured - three critically - when one of their classmates ran a red light and plowed through a crosswalk filled with dozens of teenagers, according to CBS 47 in Fresno.

"The guy went through the red light...I saw the truck and started screaming out 'Whoa, whoa, whoa!'" said Rick Chavez, a parent who witnessed the accident after picking his son. "He plowed right into the kids. Two girls were really bad. I thought they were gone. I was in shock."

The crash happened outside Hemet High School, a small desert town southeast of Los Angeles, with only two days left in the school year: it was the last day of class for graduating seniors. The group of students was heading across the street from the school toward the student parking lot and football stadium, just after school had let out for the day. They were using a crosswalk legally when a 1994 Ford Ranger simply ran them down.

About 30 people were in the crosswalk at the time of the collision. In all, nine people were injured: eight students (six women and two men) and a 60 year-old woman. (The older woman's connection to the school is not yet known.) All three of the critically injured were students: those three were run over and sustained serious head trauma, according to authorities. MSNBC reports that one victim, a 15 year-old girl, is in a "conscious coma" and intubated. The other six victims suffered minor injuries. None of their names has been released.

Witnesses said that the truck, which had been modified for off-road use, seemed to accelerate as it approached the intersection. "He revved the throttle like crazy. We heard the RPMs build," Alex Bissett, a student at Hemet, told the Riverside Press-Enterprise. "I'm still trying to wrap my head around it. I've seen a lot of crazy stuff, but this tops it."