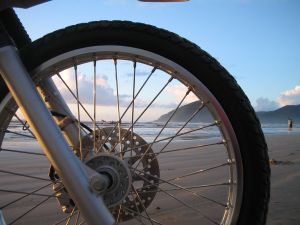 On Tuesday morning, a motorcyclist was killed in a Camden County crash, according to the Missouri Highway Patrol. The accident happened on North Business Route 5 in Camdenton at around 7:45 a.m.: a westbound SUV, attempting to turn left into a parking lot, pulled into the path of an eastbound Harley Davidson. The Harley's driver, 45 year-old Robert D. Oertle, was pronounced dead at the scene. Oertle was wearing a helmet. The driver of the SUV, 49 year-old Nancy S. Menges, was not injured in the crash.

In recent weeks, the news has been full of serious motorcycle crashes like this one. Just a few days ago, two riders were killed - and four more were injured - in a six vehicle wreck here in Springfield. Three of the vehicles involved were motorcycles. And this morning, another motorcyclist was injured in a collision with an SUV near Kansas City's riverfront.

Certainly, the prevalence of fatal motorcycle accidents is a serious issue here in Missouri and nationwide. What's more, a new report released Tuesday by the Governors Highway Safety Association (GHSA) reveals that there has been no progress in reducing motorcycle crash fatalities, even as auto accident deaths have declined overall.

The National Highway Traffic Safety Administration (NHTSA) has projected that U.S. traffic deaths dropped by 1.7% last year, taking the fatality rate to its lowest level since 1949. In contrast, GHSA's report shows that motorcycle fatalities remained at the same level (about 4,500 deaths) in 2010 and 2011.

Nationwide, 2011 motorcyclist deaths increased in 26 states and the District of Columbia: notably, South Carolina's fatality rate jumped 26%, and Texas saw an increase of 16%. The report speculates that the economy may partially account for these increases, since "higher gasoline prices may encourage riders to substitute fuel-efficient motorcycles for automobiles in trips to and from work and other everyday travel." Hence, there are simply more motorcycles on the road.

Meanwhile, 23 states - including Missouri - reported a decrease in motorcycle fatalities. However, many of those states also said there were fewer motorcycles on their roadways in 2011, due to factors like bad weather and drops in motorcycle registrations.

"It is disappointing that we are not making progress in motorcycle safety, particularly as fatalities involving other motorists continue to decline," said Troy Costales, GHSA chairman, in a news release. "As the study notes, the strengthening economy, high gas prices, and the lack of all-rider helmet laws leave me concerned about the final numbers for 2011 and 2012. Every motorcyclist deserves to arrive at their destination safely. These fatality figures represent real people - they're family, friends and neighbors."