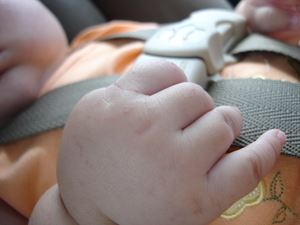 On Saturday morning, a teen mom was arrested on charges of child abuse and aggravated DUI after she drove away from a friend's house with her infant child on the roof of her car. The accident happened on Saturday in Phoenix: according to the Maricopa County Sheriff's Office, 19 year-old Catalina Clouser drove about 12 miles before realizing she had left her 5 week-old son strapped into his car seat on the roof of the vehicle.

Only two hours earlier, the child's father, 19 year-old Manuel Pena, had been arrested for DWI, and both Clouser and the child were in the vehicle at the time it was stopped. According to the Arizona Republic, Phoenix police officers stopped Pena after observing him make dangerous lane changes, nearly causing a collision. Court documents reveal that Clouser told the arresting officer that she and Pena had been smoking marijuana in a nearby park. Their son was present. The couple then decided to run to the store and buy beer, and they were heading home with their purchase when they were stopped.

The officer drove Clouser and the child back to their residence. Sergeant Trent Crump of the Phoenix Police said the office initially chose to take Clouser and the baby home because they felt Pena, not Clouser, presented a threat to the child. Shortly thereafter, however, Clouser, reportedly upset about Pena's arrest, decided to drive to a friend's house. Clouser admitted to police that she and the friend smoked more marijuana in the presence of her son before Clouser decided to drive home around midnight. The baby was asleep in his car seat.

Officer James Holmes, spokesman for the Phoenix police department, said it appears that Clouser put the car seat on the roof of the vehicle and then drove away, forgetting about her son. Upon arriving at home, she realized the child was not in the vehicle and called the friends she had just visited, asking them to check the street for the child. Clouser then began to retrace her route.