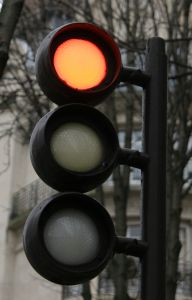 Here in Springfield, our Missouri car accident attorneys have noticed that local residents have strong opinions about red light cameras. Currently, there are "Automated Red-Light Enforcement Devices" at 13 of Springfield's busiest intersections, but none of those cameras have been operational since early 2010. The city suspended the red light camera program immediately following a Missouri Supreme Court decision, and now a city councilman wants voters to decide whether or not to continue with the program.

Red light cameras were installed at certain Springfield intersections in June of 2007. The cameras are designed to photograph any vehicle that passes through an intersection while the light is red: the system also records the date, the time of day, the amount of time elapsed since the light turned red, and the vehicle's license plate number. The photographic evidence is then reviewed by city police officers, and tickets are sent to offenders by mail.

To learn more about red light cameras, courtesy of the Insurance Institute of Highway Safety (IIHS), click here. To see where our city's cameras are located, via the Springfield Police, click here.

However, in March 2010, the Missouri Supreme Court dismissed a $100 fine imposed on Adolph Belt Jr., a former state trooper. The court found that the city was violating state law by using administrative hearings to process red light camera violations: instead, the court ruled, Springfield would have to deal with those tickets in municipal and circuit courts, which require traditional standards of proof, and allow offenders the right to appeal.

In response to the decision, the city immediately turned off the cameras and announced that all outstanding tickets would be dismissed. The chief problem is this: the existing camera system only photographs vehicles, not the people inside, making it impossible to prove who was driving. So instead, Springfield ordinance was written so that a vehicle's owner was held accountable if that vehicle committed a red light violation. But the Missouri Supreme Court's decision put a stop to that practice, so the current system can no longer be used. To continue the program, the city would need to upgrade to cameras that can photograph the faces of individual drivers. And now, Councilman Tommy Bieker is sponsoring a new ordinance that would allow Springfield voters to decide this very issue.