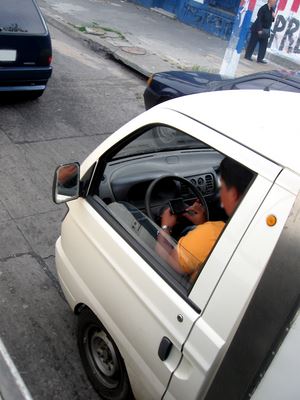 By now, we all know that texting and driving contributes to numerous U.S. car accidents every single day. And yet, sadly, some drivers continue to read and send messages while they're behind the wheel. According to safety advocates, many of these drivers genuinely believe that they can text and drive safely because they're skilled at multi-tasking. However, a new study has revealed that, in terms of texting and driving, good multi-taskers don't exist.

The study, conducted by researchers at Ohio State University, examined 32 college students who sat at computer screens. The students were first asked to complete a basic matching exercise without any distractions. Then, they were asked to repeat the matching exercise while providing walking directions to another student - they could choose to communicate the directions via instant message software or voice chat. The findings? Multi-tasking invariably caused performance of both tasks to suffer. Overall, reports ABC News, "the percentage of eye fixations on the matching-task grids declined from 76% when that was the participants' only task to 33% during multitasking."

Interestingly, however, the results also revealed that certain forms of multi-tasking are considerably more dangerous than others. Humans perform more efficiently when multi-tasking if the tasks involve two different kinds of sensory stimuli - for example, students who used voice chat (audio) while performing the matching exercise (visual) fared better than those who used instant messaging (also a visual task). Students who gave audio directions had an average 30% drop in matching performance, but those who used instant messaged showed a 50% performance drop.

The study's most troubling discovery, however, has to do with people's perception of their own performance when multi-tasking: "Participants who faced two visual challenges thought they had performed much better than they had," according to ABC. "Their ability to concentrate on the images dropped by 50 percent, yet they thought they had done just fine. Participants who had to watch and talk at the same time also saw their performance drop, by 30 percent, and they were slightly more aware of that." In other words, the students who tried to perform two visual tasks at once were more confident that they performed well, when, in fact, their performance suffered the most.

"People's perception about how well they're doing doesn't match up with how they actually perform," summarized communications professor Zheng Wang, lead author of the study. Wang also pointed out that "[the study suggests] many people may believe they can effectively text and drive at the same time, and we need to make sure young people know that it is not true."

Here are a few facts about distraction and its effects on drivers:

• When you text and drive, your reaction time decreases by 35%, your steering capability drops by 91% and your braking reaction speed is reduced by 18%.

• When you text and drive, your eyes are off the road for an average 4.6 seconds. At 55 miles per hours, that's like driving the length of a football field blind.

• When you text and drive, your crash risk is 23 times greater than a driver who isn't distracted.

At Aaron Sachs & Associates, P.C., our car accident lawyers represent injury victims in Columbia, Missouri and throughout the surrounding areas, including Jefferson City, Fulton, Moberly, Centralia and Ashland. To schedule an appointment for a free initial consultation, please call us toll-free at 1-888-777-AUTO, or visit our website.
Attorney meetings by appointment only
Categories