Battle of the Belt is a safety belt competition from the Missouri Coalition for Roadway Safety held in southeast Missouri and through out the State between Missouri High Schools. 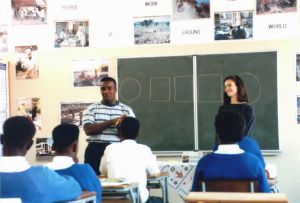 The goal is to encourage high school students to wear seat belts. And the most recent surveys show the sad truth that only 66% of Missouri teens wear them now. In the Battle of the Belt competition, schools compete in order to increase safety belt use and ultimately to save lives.

The deadline to register for this year's competition is October 1, so we encourage you to get your high school involved and get a Participation Agreement from the Missouri Department of Transportation's (MoDOT) Battle of the Belt web page. The Missouri Coalition for Roadway Safety is available through every step of the process to help with registration, guest speakers, statistical data, and demonstrations. And for educational campaign resources MoDOT has a resource list page to help out too.

How Missouri Battle of the Belt Works
Battle of the Belt lasts for 6 weeks. For each high school, one administrator, faculty, staff or parent serves as the main contact. Each high school group creates a public safety announcement (PSA), conducts educational activities to promote seat belt use and to increase seat belt safety awareness among their peers, and conducts surprise seat belt surveys during weeks 1 and 6. The competition results are tallied using the difference in numbers between the survey in week 1 and the final survey in week 6.

Schools also get the benefit of statewide recognition if they meet safety belt usage rates. A Gold Level means 99-100% of the students are wearing safety belts. Two schools in each of the 10 Missouri regions will receive grant money to be used to do even more safety belt education.

The school winning the PSA competition gets statewide recognition, grant money, and a chance to have their PSA professionally produced with the possibility of local and statewide media use.

The program originally started in southwest Missouri with the Missouri Emergency Nurses Association and St John's Hospital in Springfield, Mo. In 2006 the Missouri Coalition for Roadway Safety got involved and the competition went statewide.

Battle of the Belt is a Great Idea
Every year teens are critically injured or die from car accidents on our Missouri roads. Southeast Missouri experiences these car accident tragedies too. Unfortunately many people die or suffer worse injuries from a car accident simply because they did not wear a safety belt.

Battle of the Belt is a fun way to get the word out and get teenagers involved and motivated to help educate each other. A little peer pressure goes along way. And it is a great way to improve safety awareness in high school students while building school spirit at the same time.

Please take the time to get your school involved. Come up with a great 30 second public safety announcement and work on the educational events. The life you save could be yours or your best friend's.

It really does matter. Safety belts save lives.