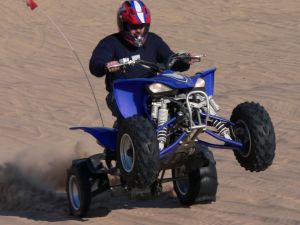 All-terrain vehicles (ATV) have become an increasingly popular way to have some fun. Introduced to the Missouri public in the early 1970s, these vehicles were marketed as fun toys for the entire family. Most adult ATVs are capable of going up to 95 miles per hour. Marshall MO accident lawyers have noted that when used for farm or work related activities, ATV injuries are rare, but when used for recreation, the story changes markedly.

The Missouri Highway Patrol reported an incident which sent a Marshall MO man to the hospital. The ATV accident occurred Tuesday, Oct 4th in a rural Marshall field. David A. Robbins, 61, was driving a 2010 Polaris, which somehow backed over the edge of a six foot drop. He was thrown from the vehicle, and airlifted by Staff for Life air ambulance to Columbia's University Hospital.

Nationwide, legislators and manufacturers have continued to make efforts to ensure ATV safety, since their dangers became obvious. Some of these changes include banning three wheeled ATVs, limitations on the engine size for child-sized ATVs, and the offering of operator training programs nationwide. Despite these efforts, ATV related injuries and fatalities continue to increase. A 2010 study by the University of Utah Department of Neurosurgery reported that spine trauma from ATV accidents costs our nation $3.24 billion each year!

Rollovers are one of the main dangers with ATVs, because their wheelbase is short relative to the height of the vehicle and rider. Obviously, since an ATV is completely unenclosed, the rider would be either thrown free of the vehicle or crushed under it during a rollover accident.

Heavy machinery and high speeds provide an exciting way to spend leisure time for many of Missouri's citizens. To enjoy your ATV and stay safe at the same time, follow these common sense tips:

• Receive the proper training for your vehicle Click here https://online.svia.org/training/Enroll/EnrollIntro.aspx to learn how to enroll in an ATV safety training course.
• Always wear a helmet, even though Missouri law only requires it for riders under the age of 18. Those without helmets have been found much more likely to sustain traumatic brain injury from an ATV accident. Select a motorcycle or other motorized sports helmet and make sure the helmet is certified by the U.S. Department of Transportation (DOT).
• Wear protective gear such as over-the-ankle boots, goggles, gloves.
• No children should drive adult size ATVs. Children under 16 on adult ATVs have been found twice as likely to be injured as those riding smaller and less powerful youth ATVs.
• Do not drive ATVs on paved roads. This is a bit counter-intuitive, as it seems that they would be perfectly safe on a paved road. However, because of how ATVs are designed, they can actually be difficult to control on paved roads. Collisions with cars or trucks frequently prove fatal.
• Never drive under the influence on an ATV, or any other vehicle. Although this is common sense, it bears frequent repetition.

If you are injured in an ATV accident, you may or may not be able to collect any damages. Was the accident caused by the negligence of someone else? Was it caused by a defective part or design? If so, you might need an ATV accident lawyer. Call the Columbia law firm of Aaron Sachs & Associates, P.C. today, toll free at 1-888-777-Auto (2886) to see if we can help you.