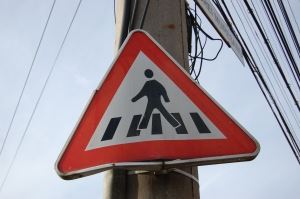 As Columbia car accident lawyers, we've seen our fair share of pedestrians seriously injured or killed by motor vehicles. These tragic accidents occur in both cities and rural areas, on community streets and even on our highways.

Pedestrian deaths due to traffic accidents include people who are crossing the road at intersections, walking along the side of the road, and even motorists who have left their vehicles to change a tire or lift their hood, when they are hit by passing motorists.

A national report released a couple of years ago showed that Columbia, Missouri citizens, live in one of the safest communities in the country--when it comes to pedestrian accidents. Nationwide, pedestrian fatalities caused by motor vehicle accidents amount to over 5,000 deaths each year. And according to the report, these deaths could have been preventable.

The report, Dangerous by Design: Solving the Epidemic of Preventable Pedestrian Deaths (and Making Great Neighborhoods), ranks various cities across the country, using a "Pedestrian Danger Index" assessment. Columbia turned up with the lowest Danger Index in Missouri--well below the national average. That's the good news! However, the same report also indicated that Missouri on the whole ranks higher than the national average.

Because of these alarming statistics, MoDot has released a new public service safety initiative: "Be Safe. Be Seen" to remind drivers and pedestrians to look out for each other.

Illustrating one aspect of the problem, MoDot's Highway Safety director, Leanna Depue said "If I say 'pedestrian,' you tend to think of someone out for exercise or kids walking to school. But a pedestrian is any person near or on a roadway who is not in a vehicle or on a motorcycle. For example, someone changing a tire on the side of the road is a pedestrian."

"Stay alert to the traffic around you and don't expect that vehicles will yield," Depue added. "Make yourself visible -- especially if your car is disabled. Turn on the headlights and hazard lights."

• If you have car trouble, pull as far off the side of the highway as possible. The Missouri Highway Patrol recommends that all occupants remain in the vehicle until assistance arrives--with seat belts fastened.

• MoDOT recommends walking in the opposite direction of oncoming vehicles, so you can see what is coming at you.

• Cross at crosswalks or intersections whenever possible--that is where motorists are expecting to see pedestrians. Even though the pedestrian legally has the right of way in many situations, don't take chances with your life. Stay alert and prepare to yield to vehicles.

Not every pedestrian killed by a car or truck is grounds for a wrongful death suit. The specific circumstances must be taken into consideration. However, as Columbia wrongful death lawyers, we have seen many cases where a driver's outright negligence caused a pedestrian's death, leading to such a suit. If you have been involved in a pedestrian accident, or a loved one has been killed in one, please contact us to see if we can help you. Aaron Sachs & Associates, P.C. offers a no-cost, no obligation initial consultation. Call us today.