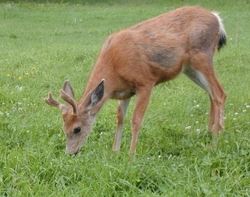 Fall is a beautiful season here in Greene County, Missouri. It's also an exciting time for many Ozarkians, as it brings the beginning of deer season - which means it's important for drivers to be especially observant during this time of year. Contrary to popular belief, auto accidents caused by car-deer collisions are a concern for both urban and rural drivers alike. In 2010, the Missouri Highway Patrol reported that almost one-third of accidents involving deer occurred in urban areas. With that in mind, Springfield car accident attorneys advise you to take extra care behind the wheel this season.

According to the Missouri Insurance Information Service, increased deer activity is a "major factor" affecting the increased number of car-deer collisions during this time of year. The Springfield Police Department concurs, reporting that the majority of car-deer collisions take place between the months of October and December, typically after dark (between 6:00 pm and midnight). When there are hunters in the woods, deer herds are more likely to be on the move, and to be spooked easily, increasing the likelihood of a collision.

The Springfield Police say the best defensive driving response is to slow down right away if you see a deer, whether or not the animal is actually in the road. Don't speed up immediately after you pass the animal by: deer usually travel in groups, so if you see one, there are likely others somewhere in the vicinity. Many accidents are caused when a driver sees a deer and slows down, only to speed up and collide with a different animal.

Often, car-deer collisions can be avoided by awareness and defensive driving. However, there are occasions when impact can't be avoided. In those circumstances, police say, drivers have better odds when colliding with a deer than with something else, like a tree, a ditch, or another car. Injuries and fatalities are most often the result of a driver swerving to miss a deer, which is a natural response, but as a result, many passenger injuries and fatalities occur when a driver swerves, overreacting, and instead collides with a fixed object or oncoming traffic.