A Bootheel man was killed in a Stoddard County crash when he was struck by an eastbound vehicle entering Highway 153, the Southeast Missourian reported.

Our Perryville personal injury lawyers remind motorists to practice caution behind the wheel as the spring and summer driving season gets under way. Good driving habits can help make a difference in lowering accident statistics and can help to keep our locals and visitors safe. Careless and imprudent driving can lead to serious and fatal accidents in Missouri's Heartland and elsewhere. With summer fast approaching, motorists will be at increased risk for car accidents in Dexter, New Madrid, Perryville and throughout Southeast Missouri. 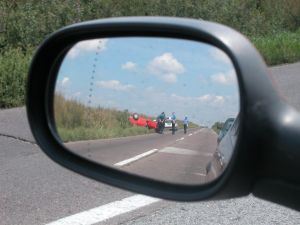 In other news, a Jackson car crash claimed the life of a 48-year-old man after a rollover accident, the Southeast Missourian reported.

Many times, a motorist is victimized by an inattentive or drunk driver. To be sure, not all Missouri car crashes can be avoided. According to the National Highway Traffic Safety Administration, motorists nationwide were involved in more than 10 million crashes last year, injuring more than 2.35 million vehicle occupants. There were nearly 50,500 vehicles involved in accidents resulting in fatalities. These fatal accidents took the lives of more than 25,000 passenger-vehicle occupants.

-Pay attention. As Missouri traffic crash reports indicate, the most common contributors to crashes are inattention, failing to yield, following too close and traveling too fast for conditions.

-Be careful in bad weather. When the roads are snow-covered or icy, the risk of being in a traffic crash increases dramatically. Patience is a key to staying safe while driving through bad weather. Spring and summer rains can also be dangerous. An estimated 42 million drivers are expected to be on the road this season. Be sure to prepare yourself for longer driving times, more traffic and occasional bad weather.

-Look out for holiday traffic. Many will occupy our roadways during popular traveling seasons, like the summer time, Memorial Day weekend and Fourth of July. Troopers are typically out in full force during these times, double checking to make sure drivers are abiding by the law. Buckle up!

-Keep an emergency kit in the trunk, including battery booster cables, an ice scraper, a flashlight, tire chains and blankets. Plan ahead and get your car checked out before making a long trip. Have a mechanic check your lights, brakes, oil, tires, heater, battery, defroster, wipers and fluid levels.

-Avoid impaired driving. Make sure your plans are set ahead of time. Find a designated driver, find an alternative way home or book a hotel room. Getting yourself arrested -- or killed -- should be last on your list of holiday events.

If you or a loved one has been involved in a car accident in Dexter, New Madrid Perryville or elsewhere in Southeast Missouri, contact the Perryville Personal Injury Lawyers at Aaron Sachs Associates PC, for a free initial consultation. Call (573) 334-7959. Attorney meetings by appoinment only.