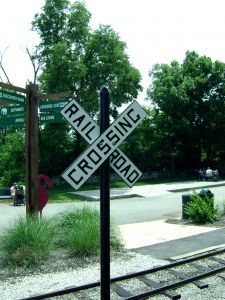 Some Missouri drivers have a complacent attitude about train crossings. It's easy to forget how dangerous these crossings are - after all, there are lights and signs that indicate when a train is coming. You simply stop and wait for the train to pass. Where's the danger, right? Unfortunately, several recent Missouri accidents have illustrated just how real that danger is.

Last week, near Seymour, a father and son were killed when their vehicle was struck broadside by an oncoming train. According to the Missouri Highway Patrol, 34 year-old Chad Lee was driving a dump truck through a railroad crossing and failed to yield to an approaching Burlington Northern locomotive. Lee and his father, 58 year-old Gary Lee, were both pronounced dead at the scene.

Local residents have expressed concern about the absence of control arms and lights at this particular intersection: the crossing is only marked by white crossbuck signs. Only 3 weeks earlier, another accident occurred at a similar crossing nearby: 68 year-old Helen Weatherford was killed in Bois D'Arc when her car was struck by a train at a crossing nearly identical to the one in Seymour: no lights or control arms, just the simple crossbuck signs.

Transportation officials refer to crossings like these as "passive crossings," meaning they do not use "active warning measures" (lights, bells, control arms, etc). And, believe it or not, officials say that the vast majority of railroad crossings are passive. Eric Curtit, the Missouri Department of Transportation's (MoDOT's) administrator of railroads, says that Missouri's approximately 3800 crossings are rated according to a "severity index." MoDOT decides which crossings are active and which are passive based on a number of factors, including (but not limited to) the frequency and speed of the trains that pass through the intersection and the amount of regular traffic.