A recent Missouri medical helicopter accident took the lives of four people. The accident happened in Clay County near Cameron Road and Northeast 146th Street and is the most recent in a number of air ambulance accidents. The National Transportation Safety Board (NTSB) is investigating the accident, specifically targeting the level of fuel. Three hospital employees were killed in the accident. The fourth victim was a patient that was being transported to Liberty Hospital. 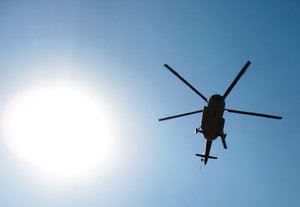 Our Kansas City personal injury attorneys understand that patients and others that require medical attention and supervision most oftentimes need to be taken care of in a timely, effective and cautious manner. When mindless accidents occur, such as the one mentioned above, companies can be held responsible for their negligence. Hospitals, care facilities and emergency transporters are required to operate under safe conditions to keep employees, patients and others safe.

"They confirmed the guy ran out of gas," said Victor Tacoronte, the patient's husband. "They took me in a little room and told me a helicopter went down."

The helicopter was from St. Joseph and was heading to Liberty Hospital in Bethany. It was scheduled to stop at the Midwest National Air Center by Excelsior Springs to get some fuel. The helicopter went down about a mile from the airport.

In 2010, there were more than 10 emergency helicopter accidents. Six of these accidents killed 16 crew members, according to the NTSB.

The operator of the helicopter involved in the most recent accident, is the biggest air medical emergency transport company in the nation. The company has had nearly 15 other incidents since the middle of 2008. These incidents took the lives of nearly 10 people.

The Federal Aviation Administration (FAA) says that the death rate for ambulance helicopters is more than 1.15 per 100,000 hours of service.

The husband of the victim who was killed in the accident is suing the helicopter company because he believes that the crew took an unnecessary risk by flying with low fuel, according Chron.

"This was more than negligence," said Kansas City attorney Gary C. Robb. "It was an inexcusable accident based on a flawed operating policy."

According to federal aviation officials, the pilot of the helicopter signaled that it needed to stop at the Midwest National Air Center to fuel up. The exact cause of the accident will not be released until a full investigation is complete, which could take a year.

According to Chron, medical helicopters usually do not fly with a full tank of fuel. This is to help prevent other dangerous issues.

Robb believes that the pilot is not to blame for the accident because he was operating in cooperation with company policy. The company should be at fault for the fatal accident.

The company is not commenting on the accident until the final investigation has been completed.

If you or a loved one has been involved in an accident with an emergency responder in Kansas City or elsewhere in Missouri, contact our Personal Injury Lawyers at Aaron Sachs & Associates PC, for a free initial consultation. Call 1-888-777-AUTO (2886).