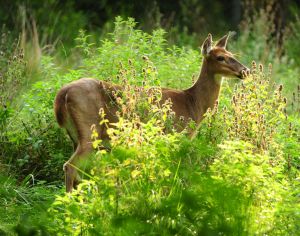 This week, the Missouri Highway Patrol issued a news release cautioning drivers about the danger of deer-vehicle collisions during the months ahead. In this post, our Springfield personal injury lawyers share some facts about car accidents involving deer, along with a few tips to help you travel safely this fall.

• In 2012, Missouri drivers were involved in 3,980 collisions where a deer-vehicle strike occurred, reports the Highway Patrol. These accidents resulted in five fatalities and over 400 injuries.

• Nationwide, State Farm Insurance estimates that 1.22 million accidents were "caused by the presence of deer" between July 1, 2012 and June 30, 2013. And the Insurance Institute for Highway Safety (IIHS) estimates that deer-vehicle collisions result in about 200 deaths each year.

• Deer-vehicle collisions are three times more likely to occur in November than they are on any day between the beginning of February and the end of August. October is the second most at-risk month for these kinds of accidents, and December is third.

• At this time of year, deer tend to be more active because it is their mating season. Further, activities like hunting and crop harvesting may also cause increased deer activity and sightings during the autumn months.

Avoiding a deer-vehicle collision: Tips from the Missouri Highway Patrol

• If you see a deer along or in a roadway, you should slow down immediately and proceed with caution. Deer tend to travel in groups, so if you see one, you should assume there are likely others in the vicinity. Also, be sure to look out for deer in areas marked with deer crossing signage.

• Be especially alert for deer activity on roadways near streams, wooded areas or farmland. Deer often venture onto roadways in these locations.

• Remember that deer are the most prone to activity in the evening hours between 6:00 and 9:00 p.m. Since visibility is also limited during this time of day, you should use extra care when driving at and after dusk.

• When encountering a deer on the road, many drivers' first instinct is to try and swerve out of the way to avoid hitting the animal. However, safety experts say doing so could easily lead to overcorrection, which can cause your vehicle to roll over, careen into oncoming traffic, or strike another roadside object, like a tree. If you see a deer in your path, brake firmly and resist the impulse to yank the steering wheel sharply.

• However, you shouldn't assume that you're only at risk for a deer-vehicle collision in rural areas. According to the Patrol, 25.5% of 2012 collisions involving deer occurred in urban environments.