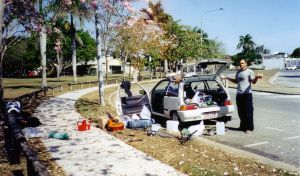 When a serious car accident happens, the force of the two vehicles' impact can cause life-threatening injuries to vehicle occupants. However, it's not just vehicular impact that can lead to traumatic injury: research indicates that objects within a vehicle can cause deadly harm to passengers in the event of a crash.

Recently, a 16-month old Illinois boy was killed in Alorton when he was struck by a loose object during a car accident. The St. Louis Post-Dispatch reports that Marshawn Billops was riding in a vehicle that, for unknown reasons, struck a light pole, causing a television to strike him in the head as it was projected out of the backseat. Marshawn's mother and six year-old sister were treated for minor injuries, but Marshawn suffered serious head injuries and was ultimately airlifted to St. Louis Children's Hospital. He later died as a result of those injuries.

• One study ("The Danger of Loose Objects in the Car: Challenges and Opportunities for Ubiquitous Computing") found that the passenger area of an average vehicle contains 4.3 potentially dangerous loose objects.

• A 2011 European study conducted by Goodyear Dunlop found that, in the event of a car accident occurring at 50 kilometers per hour (around 32 miles per hour), an eight kilogram dog (approximately 18 pounds) can strike front seat passengers with a weight of up to 400 kilograms (approximately 882 pounds). "There is a major risk of objects within the car turning into missiles in an accident," said Jens Völmicke, Director of Corporate Communications for Goodyear Dunlop Europe. "For example, a glass bottle, laptop or toy kept in the back of the car will hit the front passenger with up to 50 times its own bodyweight in a collision at 50km/h."

Protecting yourself and your passengers from unsecured objects: Safety tips for Missouri drivers

• Use the truck or cargo area of your vehicle when you're packing for a trip - that way, you don't have to worry about loose items becoming projectiles in the event of a crash. When using a cargo area, use nets and tethers to secure the items you pack there.

• If you must put larger items in the passenger area of your vehicle, organize those items so that "the maximum amount of surface area makes contact with the backseats, and [position them] in such a manner that would prevent movement or shifting," recommends CultureOfSafety.com.

• Keep loose personal items - cell phones, sunglasses, etc. - stowed in your glove compartment or console. Even a small object can cause injury to vehicle occupants in the event of a collision.