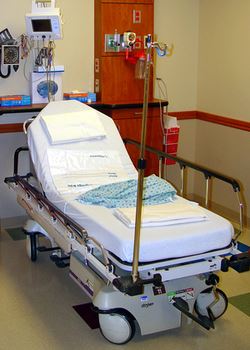 Under Missouri law, an employee must demonstrate that a workplace injury "[arose] out of and in the course of employment" to be eligible for workers' comp benefits. It might seem black and white: either you were injured on the job, or you weren't. However, a 2012 Missouri Supreme Court decision (Johme v. St. John's Mercy Healthcare) suggests that this issue could present complications to future claimants.

The employee & the injury
Sandy Johme worked as a billing representative at St. John's Mercy Healthcare at the time of her injury. The incident happened in an office kitchen that included a coffee station for all employees, and it was standard practice for the employee who took the last cup of coffee to make a fresh pot for others in the office. Johme was doing just that when she turned and stepped on the edge of her sandal, twisting her ankle and causing her foot to fall out of the shoe. She then fell backwards and landed on the floor.
Subsequently, Johme was transported to the emergency room by ambulance. where she complained of low back pain and left leg pain. An X-ray of her hips and pelvis revealed a fracture. While she did not have surgery to address the fracture, she was admitted to the hospital for pain management and physical therapy.

The claim
Johme filed a claim for workers' comp benefits, but after a hearing, an administrative law judge (ALJ) denied her claim, ruling that Johme's activity - making coffee - did not fall within the scope of her workplace responsibilities. "[Johme] was not performing her [work] duties at the time of her fall at work," the ALJ wrote. "[She] just fell and she would have been exposed to the same hazard or risk in her normal [nonemployment] life."

Johme then appealed to the Labor and Industrial Relations Commission, which reversed the ALJ's decision and awarded benefits to Johme. In its decision, the Commission specifically discussed personal comfort doctrine, which allows employees to collect benefits if they are injured while tending to basic human needs (such as hunger and thirst).

Further, the Commission reviewed the question of whether or not Johme's injury "arose out of and in the course of the worker's employment." Section 287.020.3(2) of Missouri workers' compensation law was amended in 2005 to read as follows:

"An injury shall be deemed to arise out of and in the course of the employment only if:

• (a) It is reasonably apparent, upon consideration of all the circumstances, that the accident is the prevailing factor in causing the injury; and

In considering the issue, the Commission referenced a 2010 case, Pile v. Lake Regional Health System, which outlined a standard for applying Section 287.020.3(2):

The Commission found that making coffee was in fact "incidental to and related to [Johme's] employment," and thus did not consider whether or not she would have been "equally exposed" to the circumstances that caused her injury outside of the workplace. Johme was awarded temporary total disability payments, permanent partial disability payments, and past medical expenses. St. John's then appealed the Commission's ruling, and the Missouri Supreme Court ultimately decided the issue.