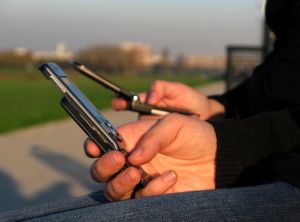 There's no question that distracted driving is a problem of epidemic proportions here in Missouri and throughout the county. Text messaging is one of the most popular forms of distraction for drivers, and most of us know how dangerous it is to send a text message while we're behind the wheel. But let's say you text a friend, knowing that he's driving, and he then causes an accident while reading or responding to the message. Can you be considerable partially responsible?

That's the question currently facing a New Jersey judge. A Dover couple recently filed a personal injury lawsuit connected to a 2009 distracted driving accident, and they're not only suing the at-fault driver, Kyle Best: they're also suing the young woman who sent him several text messages in the minutes before the accident occurred.

In September 2009, Best (then age 19) was texting and driving while commuting home from work, which caused him to drift across the center line into oncoming traffic. His pickup collided with a motorcycle ridden by David and Linda Kubert, who were both seriously injured: David's left leg was torn off above the knee, and Linda's left leg was later amputated because her injuries were so severe.

Immediately following the crash, Best told local police that he had simply looked down at his phone to see who had sent him a message. However, cell phone records revealed that Best texted the young woman just before 5:48 p.m. that day: she responded within about 30 seconds, and Best replied again. Seconds after sending that text, Best called 911 to report the accident. The records also show that the pair had exchanged multiple messages throughout the day: the Kuberts' lawyer, Stephen Weinstein, says the young woman was fully aware that Best was driving when she sent the messages, because she knew he was leaving work. He likened her actions to someone who enables a drunk driver.

"They were texting back and forth like a verbal conversation," Weinstein said, according to ABC News. "She may not have been physically present, but she was electronically present."