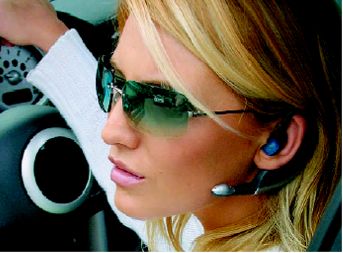 Our Webb City car accident lawyers have written many posts on the subject of distracted driving. We all know that hand-held mobile devices are a main cause of driver distraction, but what about hands-free devices that are built in to newer models of vehicles? Are they safer for Jasper County drivers than calling and texting with a hand-held phone?

David Strickland, administrator of the National Highway Traffic Safety Administration (NHTSA) made an unpopular speech to a crowd at the Telematics Detroit 2011 conference. At the conference, Strickland firmly and publicly opposed unsafe technologies that can contribute to distracted driving, reminding his audience that "a car is not a mobile device." Strickland's stance was in direct opposition to the philosophy and purpose of the Telematics conference, which focuses on technological innovations that transform cars into the "ultimate" mobile devices (in fact, this goal is even stated on the conference's website).

To be clear, Strickland wasn't expressing concerns about useful IT functions such as GPS, OnStar, automated emergency notification or internal vehicle diagnostics: his issue is with on-board systems for entertainment and social media. Indeed, these features are currently a major selling point for certain vehicles. It's true that automakers are developing more and more hands-free devices, which most people assume are considerably safer. However, recent studies have proven this assumption false, and NHTSA is taking action in response.

In February, the National Transportation Safety Board (NTSB) proposed a new series of guidelines for automakers that provide dashboard access to digital information and entertainment. Under the DOT's recommendations, text messaging, internet browsing, and social media features would be blocked when a vehicle is moving. The guidelines would also prevent drivers from manually entering data (phone numbers, GPS address entry, etc.) unless they are nonmoving. As NTSB chairman Deborah Hersman said, "It is not where your hands are, but where your mind is that counts."

In general, the DOT had this advice to offer automakers:

In response, several automakers have called on NHTSA to give equal focus to the problem of hand-held devices, according to a March 12 report by the Associated Press. Several parties stressed the importance of developing technology to prevent the use of hand-held devices in a moving car: Rob Strassburger, Vice President for Safety at the Alliance of Automobile Manufacturers, "compared restricting dashboard devices but not hand-held devices to building a fence around 3 sides of a yard while leaving the 4th side open." 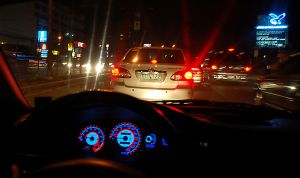 How Do Hands-Free Devices Affect a Driver's Brain?

According to the Insurance Institute for Highway Safety, hands-free devices "eliminate the physical distraction but not the cognitive distraction." Using cell phone records as verification, 2 IIHS crash studies found that the "risk of a car crash was four times higher for those talking on both hands free and hand held phones." All phone conversation tasks (meaning the use of both hand-held and hands-free phones) typically "increased reaction times, travel speeds, lane deviations and steering wheel movements."

Researchers at Carnegie Mellon University went "high tech" with their research, and used something called functional magnetic resonance imaging to measure brain activity associated with driving. Their research subjects listened via a headset to spoken sentences that they judged as true or false while steering in a driving simulator--and the results found a 37 % reduction in brain activity. Researchers concluded that listening and processing information from a phone conversation can draw mental resources away from driving, worsening performance, even when drivers are not holding or dialing a phone.

Finally, research from the National Safety Council uses the term "inattention blindness" to describe the impact of hands-free and hand-held phones on a driver's brain: according to their report, "drivers using hands-free and handheld cell phones have a tendency to 'look at' but not 'see' objects. Estimates indicate drivers using cell phones look at but fail to see up to 50% of the information in their driving environment."

We have already seen far too many victims of distracted driving accidents. We think it's crucial that drivers become educated about the very real dangers of using both hands-free and hand-held devices while behind the wheel. Our best hope is that more Missouri drivers will make an active choice to practice safe, non-distracted driving - which will help to keep us all safe.