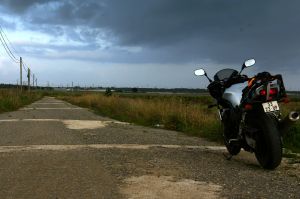 On Wednesday evening, a motorcycle accident in Shell Knob left one man dead and another under arrest. According to the Missouri Highway Patrol, Aaron L. Poston, 49, was killed while driving his 1967 Harley Davidson on Missouri 39. According to the official crash report, Poston was struck head-on by a 2002 southbound Pontiac Grand Prix that was attempting to make a turn. Poston was pronounced dead at the scene.

KY3 reports that the driver of the Grand Prix was taken into custody on suspicion of felony vehicular involuntary manslaughter, felony leaving the scene of an accident, DWI, reckless driving in an accident, and driving without insurance. However, the driver has not been formally charged as of early Thursday morning. This accident accounted for Troop D's 50th fatal crash this year, and its second serious motorcycle accident call within 48 hours: on Tuesday, troopers responded to another serious motorcycle accident in Taneyville. That motorcyclist was airlifted to Springfield with critical injuries.

In the state of Missouri, a driver is required to submit to a breathalyzer test if he or she is involved in a fatal accident. If the driver is found to have a blood alcohol limit over the legal limit, he or she could face serious legal consequences. According to Missouri law, a person intoxicated while operating a motor vehicle and acting with criminal negligence to cause the death of any person has committed first-degree involuntary manslaughter. The offense is classified as a class C felony, carrying up to seven years in prison. This sentence would possibly be applicable to a first time offender. However, many other factors can contribute to defendant's consequences.

Hit and run is a serious crime. If you're involved in an accident, be sure you follow these simple steps:

1) Stop the vehicle as soon as possible.

3) Exchange personal information (including name, address, insurance policy information, and driver's license number) with the other drivers involved in the crash.

When a driver leaves the scene of a crash, he or she is normally concerned about legal consequences associated with the incident. Sometimes a driver is impaired, uninsured or unlicensed - but the most commonly cited reason is simple panic.