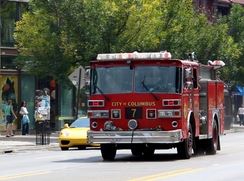 Recent Emergency Vehicle Car Accidents
A recent emergency vehicle car accident happened in October in Hannibal. A Ford suburban command vehicle from the Hannibal Fire Department was responding to a fire alarm. The fire officer was driving northbound in the passing lanes of US 61 with emergency lights and sirens activated. As he approached the intersection, he had a green light. Then, another vehicle entered the intersection and collided with the suburban. Three people were hospitalized with minor injuries.

Some of our readers may also remember a more serious car accident involving a Kansas City fire truck last February. In that accident, the fire truck was responding to an emergency medical call on Red Bridge Road when a car traveling in the opposite direction crossed over the center line, causing a head-on collision. One firefighter (the driver) was critically injured: he had to be cut out of the vehicle. The impact caused the fire truck to veer into a power pole, which in turn caused further damage to the cab.

How Can Emergency Vehicle Car Accidents Be Prevented
Missouri law states that "upon the immediate approach of an emergency vehicle giving audible signal by siren" or by visual warning lights the driver "of every other vehicle shall yield the right-of-way". This means every driver shall immediately slow down and drive to "a position parallel to, and as far as possible to the right of, the traveled portion of the highway and thereupon stop and remain in such position until such emergency vehicle has passed." The only exception is when you are "otherwise directed by a police or traffic officer."

One problem, however, is that many vehicles are sound proof enough that a driver does not hear the siren soon enough, or cannot tell where the sound is coming from. This problem is further complicated by driving with the radio on, talking to passengers, or talking on the cell phone Thus, when an emergency vehicle seemingly comes out of nowhere, many drivers are caught off guard and don't know what to do.

To reduce your chance of an accident with an emergency vehicle:

If you are involved in an emergency vehicle accident and are unsure of liability or how to proceed with medical or insurance companies, contact the Kansas City Missouri car accident lawyers. Call 1-888-777-AUTO (2886).
Attorney meetings by appointment only
Categories