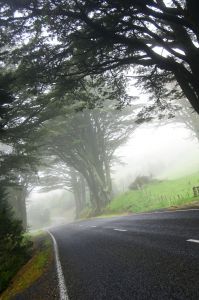 Annually, the AAA Foundation for Traffic Safety releases its Traffic Safety Culture Index, a national survey designed to assess traffic safety knowledge, attitudes, opinions, and behaviors. Our Columbia, Missouri auto accident attorneys were shocked by some of the 2011 findings: the AAA's most recent Index revealed that nearly 1 in 2 Americans have either been involved in a serious crash, or have a loved one who was seriously injured or killed in a car accident. Or both.

Of late, one of the most common causes of car accidents is distracted driving, usually associated with cell phones or other hand-held electronic devices: the survey indicated that 71% of respondents feel that using a handheld cell phone while driving creates a serious safety threat. However, 68% of drivers surveyed admitted to talking on their phones while driving within the last 30 days. The difference between drivers' attitude and behavior is even more distinct with respect to texting:

Further, consider this observation, from the discussion portion of the index:

Although many Americans seem to think traffic safety is important generally, the survey findings reveal a "do as I say, not as I do" attitude among drivers. For example, substantial numbers of drivers say that it is completely unacceptable to text message or talk on a cell phone while driving, yet admit to doing so anyway.

According to the Insurance Institute for Highway Safety, the average driver using a handheld device is four times more likely to get into an accident. Since 2009, more than half a million drivers have been injured or killed in car accidents resulting from distracted driving. And a 2009 study by the Virginia Tech Transportation Institute concluded that truck drivers are 23 times more likely to crash if they are texting while behind the wheel.

Additionally, car accidents caused by distracted driving are the number one cause of death for American teens. Crash data shows that drunk driving related fatalities have declined significantly among this age group, but the total number of teen fatalities has remained virtually unchanged - because of the sharp increase in traffic deaths connected to distracted driving. According to the National Teen Driving Survey, more than 90% of teen drivers say they never drink and drive, but 9 out 10 reported seeing a driver using a cell phone.

A large number of teen drivers admit to engaging in distracted driving behaviors like texting and talking on a cell phone - even though most respondents were aware that the behavior increased the risk of an accident. The survey revealed that 48% of respondents say they talk on a cell phone while driving, at least sometimes. While over 90% of teen drivers say they don't drink and drive, nine out of 10 say they've seen passengers distracting the driver, or drivers using cell phones.

Certainly, drunk driving and distracted driving produces many of the same effects. Researchers at the University of Utah found that cell phone use while driving has the same effect on motor vehicle operation as being legally drunk. Using a hand-held device while driving - texting, in particular - reduces a drivers' awareness and performance, and draws their attention away from the road.

35 states and Washington D.C. have laws banning all drivers from sending text messages while behind the wheel. Regrettably, Missouri is not one of those states. In Missouri, only drivers under the age of 21 are barred from texting, but this ban has proven difficult to enforce.

We know the temptation can be difficult to resist. While sitting at a stop light or stuck in traffic, drivers throughout the Columbia-Jeff City area often find themselves reaching for their cell phones to type out a quick note to a friend or family member. It may seem quick and harmless, but texting while driving can - and does - lead to motor vehicle accidents resulting in personal injury, property damage, and even death. These accidents and injuries have resulted in a cost of thousands of lives and millions of dollars in insurance claims, medical bills, lost wages, and other expenses to drivers in Missouri and all over the United States. Resist the temptation: the risk is far too great.