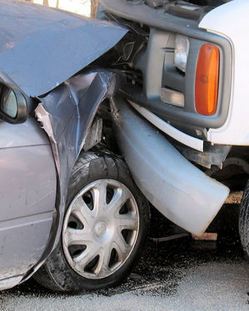 As Missouri personal injury attorneys, we know that head on collisions frequently cause serious injuries and/or fatalities--in Kansas City and throughout the United States. In 2005, only 2% of auto accidents nationwide were head on collisions, and yet head on collisions accounted for 10.1% of fatal accidents. These accidents (along with sideswipes and run off the road accidents) are commonly referred to as lane departure or road departure accidents, and most often occur on undivided, rural roads (normally as the result of failed passing maneuvers). However, when a head on collision occurs on a busy urban highway, the potential for damage is especially high.

Such an accident occurred recently on Interstate 70, near Topeka, Kansas, when an eastbound car crossed the grass median and struck a westbound minivan head on. The van was occupied by a family of 5: a pastor, his wife, and their three children, who had just moved to Kansas about a month previously. Laura Geske, age 37; Joshua Geske, age 8; and Joy Geske, age 3 were killed in the collision. Reverend Jeffrey Geske, age 41; and Joy's twin, Jacob Geske, age 3, survived, but suffered serious injuries in the crash. Everyone involved in the accident wore a seatbelt, and the younger Geske children were properly restrained in child safety seats.

The driver of the other vehicle, 62 year-old Steven Moore, also survived, but he was also seriously injured. The Kansas Highway Patrol continues to investigate what circumstances caused Moore to cross the median. According to State Trooper Steve Larow, officers are waiting for test results to determine whether or not Moore suffered some kind of medical condition or episode just prior to the collision. They're also examining speed as a possible contributing factor.

Indeed, statistics show that head on collisions are almost always the result of an unintentional maneuver by a driver who falls asleep, or becomes distracted, or takes a curve while traveling too fast. Other factors - like alcohol or drug use, for example - may also play a role. It's worth noting, however, that the key factor here is driver error.

The American Association of State Highway and Transportation Officials (AASHTO) recommends several preventative measures to address the severe nature of head on collisions. These measures are designed to achieve three crucial goals:

• To keep vehicles from leaving their lanes, and/or encroaching on other lanes of traffic

• To minimize a vehicle's risk of crashing into oncoming traffic, in the event of lane departure

• To reduce the severity of head on collisions when they do occur, reducing the number of serious injuries and fatalities

According to their formal report, "affecting head on fatalities is clearly more complex (and perhaps more difficult) than just providing adequate passing zones." Here are a few examples of the specific strategies that are advocated by AASHTO:

• Use centerline "rumble strips" and thermoplastic strips on 2 lane roads, to alert drivers when they have crossed the centerline

• Adjust lane and shoulder width on 2 lane roads, to allow room for a buffer median

For more information about head on collisions and the injuries they can cause, see the following resources:

Car and Truck in Head On Collision: The Physics Classroom