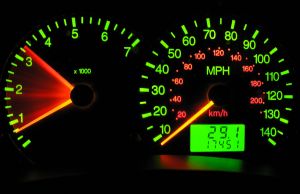 All too often, collisions involving cars and pedestrians result in serious personal injury. Normally, these accidents are caused by an unforeseen circumstance (like a pedestrian darting into the roadway unexpectedly) or by a driver's carelessness (drunk or distracted driving, for example). However, this week in Missouri, police are charging a woman with striking 3 pedestrians on purpose.

A Kansas City mother is charged with 1 count of first-degree assault, 2 counts of second-degree assault, and 3 counts of armed criminal action after she admitted to driving her SUV into a group of young girls near Ingels Elementary School. As of Monday evening, 35 year-old Ladonna Newton remained jailed in Jackson County.

It all started at around 4:30 p.m. last Friday. The Kansas City Star reports that Newton's daughter was involved in a fight with another girl as a group walked home from school. The daughter lost the fight and returned home, but later called one of the girls to say she wanted to fight someone else. The group returned to the location of the original fight to wait for Newton's daughter.

Newton drove her daughter to the scene, bringing a second daughter along as well. As a second fight began - this one involving the second daughter - Newton allegedly accelerated through the parking lot and into the grassy area where the girls were fighting. She struck 3 people, dragging 1 underneath her SUV. Witnesses report the SUV subsequently struck a sewer ditch and fled the scene.

About 90 minutes later, Newton walked into the Kansas City Police Department's South Patrol Division. She told officers there that she had driven into a group of kids, but that she had only done so by accident: she claimed that her foot had slipped off the break and onto the gas, and that she didn't know if she had actually hit anyone.

At this time, the medical status of the 3 victims is unknown, except that their injuries were non-life-threatening. Jackson County Prosecutors have asked that Newton's bond be set at 10% or $70,000.

A second degree assault charge is a class C felony. Several acts might justify such a charge, including causing injury to someone by using "a deadly weapon or dangerous instrument;" or by driving while under the influence of alcohol or drugs.

"Any person who commits any felony under the laws of this state by, with, or through the use, assistance, or aid of a dangerous instrument or deadly weapon is also guilty of the crime of armed criminal action and, upon conviction, shall be punished by imprisonment by the department of corrections and human resources for a term of not less than three years."

There's no question that these legal consequences are severe. In addition to criminal charges, victims often bring personal injury lawsuits against the perpetrators of these crimes. When a driver acts recklessly, negligently, or willfully to cause injury to another person, the injured party has recourse to civil court. There, victims can take action to recover losses for medical bills, lost wages and pain and suffering.