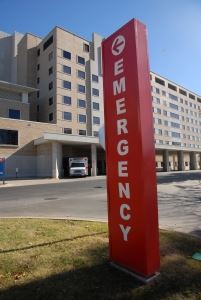 A level 1 trauma center means, in part, that St John's has a full surgical staff available at all times. And the most serious injuries generally require surgery. And as such St John's sees a lot of patients. They have found that injuries resulting from car accidents involving teen drivers and their passengers are the leading cause of trauma in teenagers admitted to the trauma center.

How Driver's Education Fits In
With the current economic times most schools throughout the country are forced to cut programs. And in southwest Missouri several schools have had to cut driver's education. Studies show that driver's education produces safer drivers with fewer accidents. So St. John's has decided to take a proactive step and provide a driver's education course through the hospital as part of their Kohl's Injury Prevention Center.

Funded by a grant from Kohl's, St John's driver education program is unique. It was actually created in 2010 and has had a 95 percent success rate for students passing the Missouri driver's exam. The curriculum is taught entirely behind the wheel. There is no classroom time and it is taught one-on-one. Through polling they discovered that teens learn how to drive best by doing and with the focused attention of a one-on-one setting. From the beginning the student is taught without distractions.