Columbia car accident lawyers are seeing more and more reports of fatal accidents happening not because of drunk driving or aggressive driving, but simply because a driver loses control of their vehicle. Many times the vehicle travels off one of Columbia's roads into a ditch, strikes a tree, or overturns. In other more dangerous instances of losing control, the vehicle travels across the center line into oncoming traffic, causing a head-on collision. 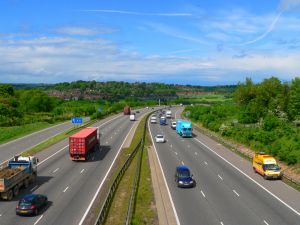 What exactly is going on here? It's hard to imagine that there are so many Missouri drivers who cannot control their vehicles. We have to wonder if a large proportion of these accidents can be attributed to distracted driving, but the distraction is never admitted to or determined in the Missouri Highway Patrol's crash report.

On Sept. 25, a driver from Lake St. Louis lost control of her 2000 Lexus on I 70, just east of Route Z at the 134.6 mile marker. Nicole D. Buffa, 19, crashed right through the median cables separating the east and westbound lanes, flipped over, and hit another car head-on. Sadly, the driver of the car she hit, Audra B. Snyder, 43, of Topeka, Kan., was killed.

Snyder was pronounced dead around 2 p.m. at Columbia's University Hospital. Buffa was also taken to University Hospital and reported in serious condition. A third vehicle was damaged by flying debris from the accident, but the damage was minor, and that driver fortunately was uninjured. MSHP's Troop F reported this as the forty-fifth traffic fatality of 2011 in their jurisdiction.

There are many reasons someone might lose control of their vehicle, including bald tires, tire blowouts, slick road surfaces, going too fast through a curve, but the main cause in this day and age seems to be distracted driving.

According to a National Highway Traffic Safety Administration (NHTSA) study with the Virginia Tech Transportation Institute (VTTI), 80 percent of car accidents and 65 percent of near-accidents were shown to have some kind of driver distraction as a factor.

Key results of the study include:

• Drowsiness: increases a driver's risk of a crash or near-crash by 4X. Probably significantly under-reported in police reports.
• Cell phone use: by far the most common driver distraction. Dialing, talking and even listening all contribute substantially to car crashes.
• Reaching for a moving object ups the risk of an accident 9X, applying makeup by 3X; dialing a a cell phone by almost 3X; and talking or listening to a cell phone by 1.3X.

Obviously, drivers who attempt to multi-task have a higher incidence of car accidents and near misses. If it is someone's habit to multi-task while driving, they might wait for a moment that is safe to change the CD or check their lipstick in the rear view mirror. However, there really is no safe moment because driving situations change in an instant, leaving the distracted driver no time to react. Taking one's eyes off the road even for a few seconds can have disastrous results--not just for that driver, but for other motorists and pedestrians.

Click here to read more from the NHTSA study.

If you have been in a car accident due to the negligence of another driver, you might require legal assistance. The Columbia law firm of Aaron Sachs offers a free initial consultation to discuss your claim at 1-888-777-Auto (2886). Call us today to see if we can help you.