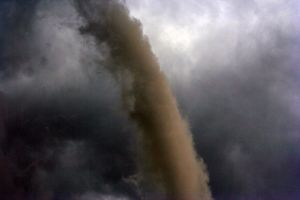 Missouri Workers' Compensation Lawyers like to keep up with workers' compensation cases not just here in Missouri, but nationwide. We have heard of a particularly unique workers' comp trial, which might be of interest to Missouri residents and particularly residents of Joplin, in the wake of May's deadly tornado.

In Tennessee, a truck driver who was injured when his truck was hit by a tornado won his claim for benefits in a workers' compensation case that somehow made it all the way to the Tennessee Supreme Court. (Dixon v. Travelers Indemnity Co.)

The case hinged on the fact that the injury, which happened while he was performing his job, was due to an uncontrollable force of nature. In Tennessee, the employee must prove the injury happened due to increased risk specific to the nature of his employment--and not a danger common to the general public at the place and time it happened.

Driving an 18-wheel tractor-trailer in heavy traffic, a trucker encountered a storm with intense wind and rain. Slowing his speed, he attempted to get off at the next exit, but traffic was backed up by everyone else who had the same idea and was trying to get off the highway. He headed for the next exit. Driving along, he came across either a billboard or exit sign blowing across the highway, and slowed his speed even further.