Columbia and Jefferson City Missouri drivers are part of the recent wave of aggressive driving sweeping the nation. Aggressive driving is a recent phenomenon that has become a serious problem on our roadways. The statistics are startling: On average, 1,500 men, women, and children are injured or killed each year in the United States as a result of aggressive driving.

According to the National Highway Traffic Safety Administration (NHTSA) aggressive driving can be any of the following unlawful driving actions such as: 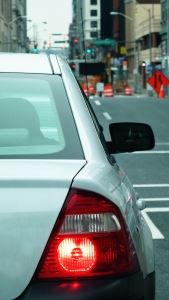 • Speeding - exceeding the posted limit or driving too fast for conditions
• Excessive lane changing - changing lanes without reasonable cause
• Improper passing - failing to signal intent, using an emergency lane to pass, or passing on the shoulder, cutting into another car's path
• Tailgating - driving near the back of another's car at too close of a range

An aggressive driver will deliberately behave in such a manner as to increase the risk of an automobile accident. He or she may drive so recklessly as to injure or kill another driver or himself, leading to charges of manslaughter or murder.

• The "aggressive driver" fails to consider the human element involved. The anonymity of being behind the wheel gives aggressive drivers a false sense of control and power; therefore, they seldom take into account the consequences of their actions.

• Aggressive Driving vs. Road Rage. There is a difference. Aggressive driving is a traffic offense; road rage is a criminal offense.

• Road rage is defined as "an assault with a motor vehicle or other dangerous weapon by the operator or passenger(s) of another motor vehicle or an assualt precipitated by an incident that occurred on a roadway." It requires willful and wanton disregard for the safety of others.

AAA Foundation for Traffic Safety commissioned a study of this unpleasant fact of modern life. 10,037 incidents were gathered from newspapers, police reports, and insurance reports and reviewed by the firm Mizell and Company. These incidents clearly show that anyone can be targeted and victimized by an aggressive driver.

Apparently, anyone can also be an aggressive driver as well; the study found there was no one specific profile of who would be likely to drive aggressively. Perpetrators ranged in age from 18 to 75 years old, although the majority fell between the ages of 18 and 26.

Tips to Combat Aggressive Driving in Columbia or Jefferson City

• Always buckle up; that is the best defense against an aggressive driver.
• Do not engage the other driver or react to provocation in any way. It might seem obvious, but never shout out your window or make rude gestures that will exacerbate the situation.
• Do your best to get away from the driver safely.
• Call local law enforcement to report the aggressive driver to the state police. Be prepared to provide a description of the driver's vehicle, location, direction of travel and license plate number.
• If an aggressive driver is involved in a crash farther down the road, stop a safe distance from the crash scene, wait for the police to arrive, and report the driving behavior that you witnessed.

Apparently the pace of modern life, the economy, and a whole host of other factors are causing many of our Columbia and Boone County citizens to drive in an angry, reckless and unsafe manner. Please do not join them! Jefferson City Personal Injury Attorneys caution you to drive calmly, alertly and defensively, and stay safe on Missouri's highways.