Missouri personal injury lawyers have reported on a couple of train accidents in recent weeks--and here is another one. The St. Louis Dispatch reported August 1st that a train struck a tractor trailer that was on the tracks in Maplewood, MO. Train accidents are frightening due to the extreme power and weight of the train, and they can cause serious destruction and loss of life. Fortunately in this case, the only injuries were minor. 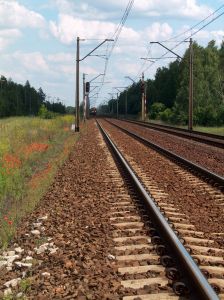 Here's what happened: The tractor trailer tried to make a sharp turn onto Railroad St., but got stuck on the railroad tracks. While trying to maneuver his rig off the tracks, the crossing gates came down indicating a train was coming. Sure enough, the train hit the back of the trailer and completely took off its back door and part of the side walls.

The force of the collision caused the tractor trailer to smash into a pickup truck that was waiting at the crossing gate. The only injuries occurred to the passenger in the pickup truck. According to Maplewood Fire Capt. Stephen Koppel, his injuries were minor.

This was a freight train, not an Amtrak passenger train like the other recent train crashes. However, it is hard to even imagine the panic of the trucker and the occupants of the pickup when they saw the train bearing down on the tractor trailer and realized this accident was about to happen.

Maplewood Police Sgt. Matthew Nighbor said the police were conducting a thorough investigation, but would not say whether or not the tractor trailer driver would receive any kind of ticket. Rescue crews were on hand to clean up at the scene.