A motorcyclist from Kansas City, Missouri was recently hospitalized after being involved in a crash just before 6:00 p.m. The 34-year-old rider was headed northbound when he traveled over some loose gravel on the roadway. The rider lost control of his vehicle and ran right into a ditch. Medical officials report that he was wearing a helmet at the time of the accident. They believe that he may suffer from a broken wrist. His bike is reported to be totaled, according to Lavenwroth Times. 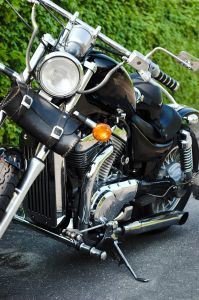 Summer may be fast coming to an end, but motorcyclists across the state are still hitting the open road trying to squeeze in every last day of riding before the wicked weather rolls through. Motorcycle accidents in Kansas City can be prevented with a little bit of cooperation from all motorists on our roadways. Unfortunately, motorcyclists are typically more vulnerable to injury and death in the event of a traffic accident as they're provided with less bodily protection.

Our Kansas City motorcycle accident attorneys understand the popularity of these two-wheeled vehicles. We also understand that these riders face high risks for serious injury and death on our roadways. As a matter of fact, although motorcycles made up only 3 percent of all registered vehicles in the U.S. in 2008, they accounted for nearly 15 percent of all traffic accident deaths during the same year. Nearly 5,300 motorcycle drivers were killed on U.S. roadways in 2008.

Motorcycle accident statistics for 2008, according to the National Highway Traffic Safety Administration:

-Nearly 50 percent of all motorcycle accidents involved a collision with another motor vehicle.

-More than 40 percent of the near 2,400 fatal two-vehicle accidents that involved a motorcycle occurred when the other vehicle turned left into the path of a motorcycle.

-During two-vehicle traffic accidents, nearly 80 percent of motorcycles were hit in the front. Only 7 percent were hit from the rear.

-Motorcycle accidents are more likely to be alcohol-related than other types of motor-vehicle accidents.

-Nearly 2,000 motorcyclists' lives were saved because of the use of helmets.

-Motorcycles are more likely to be involved in an accident with a stationary object.

-Helmets are nearly 40 percent effective in preventing serious injury in the event of an accident.

Motorists are urged to be cautious of our two-wheeled travelers along our roadways. Motorcyclists are oftentimes overlooked because of their small size. Car drivers are asked to check their blind spots frequently, but especially when changing lanes or making turns. Don't share lanes with a motorcycle. They're required to follow the same road laws as everyone else and it's important to treat them the same as other motorists.

If you or a loved one has been involved in a Kansas City motorcycle accident, call the Missouri Injury Lawyers at Aaron Sachs & Associates for a free initial consultation to discuss your rights. Call 1-888-777-AUTO (2886).