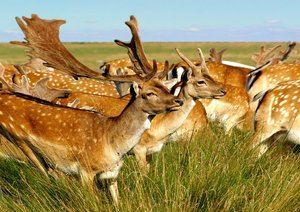 According to State Farm, the country's largest insurer of private passenger automobiles, there were over a million car-deer collisions in the U.S. between July 1, 2010 and June 30, 2011. Here in Missouri, drivers were involved in an estimated 28,096 collisions with deer during the same time period. (Missouri was also ranked the 19th most dangerous state for this kind of accident: the likelihood that a Missouri driver will collide with a deer is 1 in 150, compared to a national average of 1 in 193.) The National Highway Traffic Safety Administration (NHTSA) reports that these accidents result in approximately 200 deaths, 10,000 injuries and $4.6 billion in costs every year.

Our Poplar Bluff car accident lawyers urge motorists to be extremely cautious, as many Missourians regularly travel through areas where deer are abundant. Car-deer collisions are most likely to happen in the fall (during mating season) and the spring (when fawns are born, and deer are moving about to search for food). Dawn and dusk are the most dangerous times of day, according to the Insurance Institute for Highway Safety (IIHS), because deer are active, traffic is heavy, and roadway visibility can be limited.

These collisions can have all manner of troublesome consequences. The Insurance Information Institute (III) says "the average claim for deer-vehicle collisions is $3,100, with costs varying depending on the type of vehicle and severity of the damage, up 1.7 percent from a year ago." Not only are these accidents costly, they're also extremely hazardous: car-deer collisions regularly cause serious injuries and fatalities. In fact, these accidents often turn dangerous and even deadly when a motorist swerves to avoid hitting a deer in the roadway.

Injuries resulting from many car accidents involving deer aren't caused by impact with the deer, but by the crashes caused when drivers attempted to avoid the deer. Russ Rader, IIHS spokesman, says this chain of events is a common one. "These crashes happen so fast, often times drivers don't have the option of making a decision about what to do," Rader says. "But the best thing, unfortunately, in most cases is to hit the animal and try to avoid swerving or doing something that could cause you to lose control and hit somebody else or an object or go off the road and roll over."

To help reduce the risks of deer-related car accidents:

• Watch for deer near the roadway at all times, especially during dawn and dusk.

• If you spot a deer, be cautious: there are likely more nearby. Deer rarely travel alone.

• Remember that deer tend to travel in single-file lines.

• Remember that deer will dart in different directions if they're startled.

• Be extra cautious along roadways that have posted deer-crossing signs. These signs mean that there have been several sightings in the area, and the location is a place where deer typically gather.

• Reduce your speed when traveling through areas that are known to be heavily populated with deer.

• Use your high beam headlights (when possible). High beams "will better illuminate the eyes of deer on or near the roadway," according to the III.

• If you see a deer in the road ahead, try not to panic. If there's enough time, use your horn to startle the deer away. The III advises you to "brake firmly when you notice a deer in or near your path, but stay in your lane. Many serious crashes occur when drivers swerve to avoid a deer and hit another vehicle or lose control of their cars."