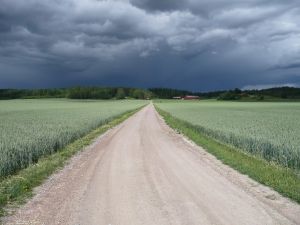 The Missouri Highway Patrol is asking for the public's assistance regarding a tragic hit and run accident that killed 18 year-old Steeler Seaburn last Thursday night. Seaburn, a senior at Willard High School, was found lying on Farm Road 94 near Stick Horse Lane, and pronounced dead at the scene. According to the Patrol, an unknown vehicle was traveling north when it struck Seaburn, who was walking along the road. The accident occurred sometime between 11:30 p.m. Thursday and 2:30 a.m. Friday.

It is not known why Seaburn was walking on Farm Road 94: his car was found nearby with the flashers on and the driver's side door open. Initially, police believed that his vehicle had broken down, but it was found to be operational. Sgt. Jason Pace of the Missouri Highway Patrol says troopers are currently looking for anyone who might have seen anything near the accident scene: if you have any information, you can contact the Patrol at (417) 895-6868.

Seaburn was an active, popular student: he was a starting defensive back/ wide receiver for the Willard High School football team and an all-state wrestler. His wrestling coach, Kiiler Stephens, says that Seaburn was an exemplary athlete and team leader who always made people laugh. "He was the funniest human I've ever met," Stephens told the Springfield News Leader. "The kids loved him. He always had a smile at whatever he was doing."

The Willard School District was closed on Friday and remains closed today for the Easter holiday, but that didn't stop students from coming to campus to honor Seaburn, according to Willard Athletic Director Jeff Staley. "Steeler was an incredible young man who will never be forgotten. In these situations, kids rally around each other better than adults do sometimes," Staley said.