It is a common believe in Dexter Missouri 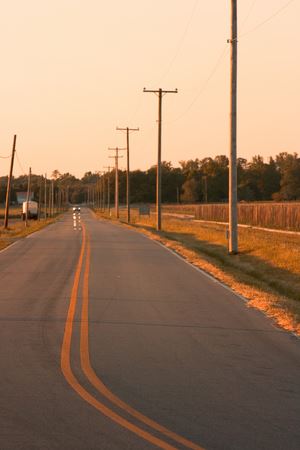 and everywhere that you are more likely to get into an accident on a city street. A recent study released by TRIP, a national transportation research group, shows this is not true. And car accident statistics from Missouri State Highway Patrol (MSHP) also support this research.

Grim News for Missouri from TRIP
Founded in 1971, TRIP is a non-profit organization that researches, evaluates and distributes economic and technical data on surface transportation issues. TRIP released a report this month (September 2011) that addresses the condition of rural roads and bridges in America's Heartlands. Rural America is defined as all places in areas outside of the primary daily commuting zones of cities with a population of 50,000 or greater.

According to this latest report Missouri's rural roads and bridges are among the most deteriorated in the nation and Missouri's rural traffic fatality rate is three times higher than all other Missouri roads. In 2009 there were 533 rural non-interstate traffic accident deaths and 878 deaths total for Missouri.

TRIP and Missouri Rural Car Accidents
In 2009 Missouri ranked 9th among states Nationwide with 533 non-interstate traffic deaths. Another sad number is that for every 100 million vehicle miles of travel in Missouri there were 2.31 rural car accident deaths. All other roads in the same category resulted in 0.75 traffic deaths. And all Missouri roadways combined resulted in 1.27 car accident deaths per 100 million vehicle miles traveled. These numbers actually matched the numbers for the United States as a whole, but are still serious.

While Missouri traffic fatalities have shown a steady decline since 2005, 821 in 2010, including 7 people in Stoddard County, the TRIP report showed a "disproportionately high" number of traffic accidents and fatalities on rural roads.

In 2009 34% of all fatal rural road car accidents involved a vehicle leaving the roadway, only 21% for urban roads. From attempting to negotiate turns to crossing into oncoming traffic, rural roads pose a greater risk for car accidents than urban roads.

Dexter and All Southeast Missouri Drivers Should Take Extra Precaution on Rural Roads
As with all accidents, driver behavior is one of the greatest contributors to car accidents. Inattention and excessive speed continue to produce car accidents. Slow down on rural roads. Even if you drive the same road all the time, don't assume you know the road so well that you do not have to pay close attention.

It only takes a few seconds to drift from your lane and lose control of your vehicle or cross into oncoming lanes. If you remind yourself of this while you are driving you can reduce the chances that this will happen to you and be more alert for someone else doing it.