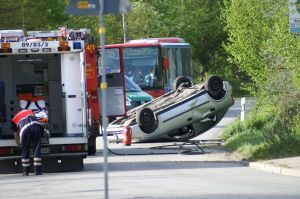 Officials credit other influences for the decreasing number of accidents. Some would argue that the increased visibility of traffic enforcement, new laws banning distracted driving and more wide-spread seat belt laws are causes for the accident decrease. Officials hope to continue to reduce the number of car accidents in Jackson, Charleston, Cape Girardeau and elsewhere in Southeast Missouri even as the nation experiences what we all hope is a sustained economic recovery.

"We've worked hard to make sure drivers are getting our 'Click it or Ticket' and 'Over the Limit, Under Arrest' messages," noted Secretary of Transportation Ray LaHood in his blog. "I have been on a personal tear to raise awareness about distracted driving."

According to the NHTSA, the U.S. saw one of the lowest fatality rates in history last year, with 1.16 deaths for every 100 million vehicle miles traveled. The Administrations stated that the decrease in fatalities for 2010 occurred even though there was an estimated increase of nearly 21 billion miles in national vehicle miles traveled.

"The decrease in traffic fatalities is a good sign, but we are always working to save lives," said NHTSA Administrator David Strickland. "NHTSA will continue pressing forward on all of our safety initiatives to make sure our roads are as safe as they can possibly be."

According to a report by the NHTSA, specific to Missouri, the state saw close to 900 traffic accident fatalities in 2009. Roughly 300 of those fatalities involved a driver with a blood alcohol content over the legal limit of .08.

As we head into the spring season, travelers will begin making their vacation plans. With each passing week, the traffic on our roads will increase. Motorists are encouraged to drive safely and alertly and to do all they can to ensure they reach their destination safely.

If you or a loved one has been involved in a car accident in Poplar Bluff, Cape Girardeau, Sikeston or elsewhere in Southeast Missouri, contact the Personal Injury Lawyers of Aaron Sachs & Associates PC for a free initial consultation. Call (573) 334-7959. Attorney meetings by appointment only.